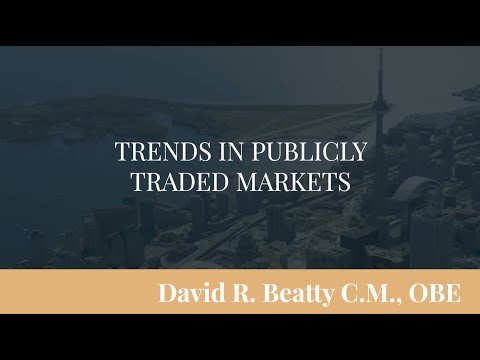 What’s happened to the number of publicly traded companies?

Most of us would probably have anticipated growth in the number of issuers as one of the major trends in publicly traded markets in these two countries over the last couple of decades.

But the number of publicly traded companies in the United States has dropped by 50% in the last twenty years. The figure for the United Kingdom is the same. That’s a really dramatic fall.

The TSX–Venture Exchange in Canada, which does keep a lot of little things cranking along, is an exception but by and large, the attractiveness of public markets has been declining precipitously.

There are three main reasons why becoming a publicly traded company has become a less attractive option. Two of them are push factors, and one of them is a pull.

What trends are pushing entrepreneurs and investors away from publicly traded markets?

On the push side, two different forces are at work: short termism and activism.

Short termism means that your shareholders are only interested in how your company performs in the next quarter. For these “quarter-to-quarter” investors there is no long term. Or if there is one, it’s what lies two quarters ahead rather than one year.

About ten years ago, Dominic Barton, then the head of McKinsey and Company, authored a study called Capitalism for the Long Term. In it, he describes a myopic focus on short termism across Western economies and financial markets.

Barton teamed up with Mark Wiseman, then the head of the Canada Pension Plan Investment Board, create a non-profit organization called Focusing Capital on the Long Term (FCLTGlobal).

If you look at FCLTGlobal’s website, you will find some very prominent people on the board, as well as a staff of really quite dedicated and wonderfully experienced executives.

Activism is the other force that is pushing companies away from the public markets.

Activists look at a company and say, “I could do better if I was running it.” In the United States in 2019, there were over six hundred separate campaigns against operating companies.

Activists are a recent variant of what, in the previous century, we called “Raiders”. The difference in substance may not be great – both raiders and activists prowl in the public markets seeking out underperforming companies and then pouncing upon them.

Any company seeking financing in a public market now must factor in the costs of both activism and short-termism. These two forces combine to capture a significant amount of C-suite time. Time that is completely unproductive in terms of creating long term value.

Marc Andreessen, leader of what is, perhaps, Silicon Valley’s most successful Private Equity firm said at a Stanford Business School conference: “If we ever take a company public, we will take it public with dual class shares to avoid the twin costs of short-termism and activism. I want my management teams to be 150% focused on the company’s future – not responding to endless requests from recently graduated MBAs.”

What’s pulling companies away from listing on public markets is the ready availability of free money from Private Equity firms….now numbering some 6,000 with an estimated $2 trillion of unspent money.

Private equity returns in the last decade have proven to be far higher than stock market returns so the pension funds and other asset managers, seeking diversification, invest heavily in PE firms..

If you want capital as an entrepreneur, you no longer have to go to the public marketplace. You can be satiated with capital in the private equity marketplace.

What does the future hold for public and private companies?

Investors and entrepreneurs are really feeling the push of short termism and activism, not to mention the pull of private equity’s free-flowing capital and returns. As a result, the prospect of bringing your company public is a lot less attractive than it used to be, and so a lot of companies are deciding against that course of action.

In 2019, there were only 110 new public issues. The average figure for the decade earlier was over five hundred.

But, in the last year an entirely new phenomenon has surged to the front and dramatically expanded the number of publicly traded companies – the so-called SPAC. More on that later.