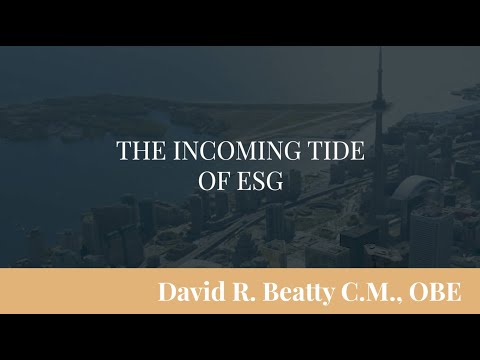 The Incoming Tide of ESG

David Beatty: There’ve been many increasing pressures on boards from activism to short-termism to stakeholder groups of all sorts and kinds. There’s another tidal wave coming in called E, S, and G, environmental and social governance. We saw last summer that the business roundtable in the United States, people like Jamie Diamond, Larry Fink of BlackRock, Warren Buffet, all came out and said, the American dream is really getting gray, and we’ve got to have a more diversified view of the purpose of a corporation in society.

Well, do these people speak with a fork tongue? That’s the question. Some work has been done that says they do. They piously expound that we should be doing more, but then they themselves in their own businesses manage for the next quarter. So we’re on the brink of something that’s really pretty profound. The European experience is, in my view, 10 years ahead of the American practice. And in Europe, many, if not most of the large asset managers are all over the operating managers of the companies they own about a broader, more holistic view of their purpose. The problem is there are huge short term pressures in North American publicly traded markets, and they’re huge activist pressures, so any company that sort of diverges and moves more into social good is going to be penalized, I think pretty directly.

There are, however, some things directors might look for, and those are what I call the win-win situations. I have two examples. Number one is Microsoft, and the Microsoft executives found that their programmers coming in off the streets of Seattle were really quite disturbed to see street people in such profusion and in such dismay. The result was that they created a foundation to look after the street people in Seattle, run by the Microsoft employees themselves and funded by Microsoft. Result? Happier, more fulfilled employees, a better city, a better nation.

A second example is in the consumer products goods area. Mars, the privately-held confectionary candy company, Mars bars, Snickers, Mars goes now back to the West African countries that grow cocoa, and they work with the shareholder cocoa farmers on their education of their children, the health of their families, and their financial capacity to withstand adversity, in the belief that at some point in the not too distant future, somebody buying a Mars bar in an OECD country will really be concerned about the supply chain, and what are we doing about our procurement of cocoa. Are we abusing the people who grow this raw crop, or are we working with them? And so Mars has built quite a considerable capacity now to work with the indigenous farmers of West Africa to ensure that their lives are more fulfilling, more enhanced, and more capable of continuing to be suppliers to the company.

Both of these are win-win. And I think if you’re a director of a sentient board, you should be looking for opportunities within the company, working with the senior management team to find areas where you can make your people happier by doing some good in the community. Or you can make your consumer product more appealing by ensuring that the supply chain is fully rational and ethical and responsible. So E, S, and G, it’s coming. It’s a tidal wave. You’re going to hear more and more from your asset managers about it, but you can get an early start, I think by looking for these win-wins.

← GLOBE AND MAIL: Board Members Need to Think Long-Term to Get Past the COVID-19 Crisis
PODCAST: Boards Should Invest More Time on Foresight →