In our continuing series, Corporate Governance Expert David Beatty offers insights into how ES&G factors may affect your corporate board of directors. 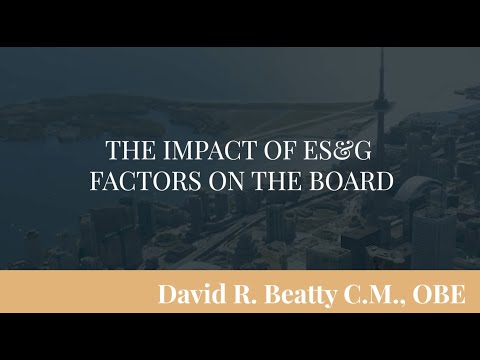 The Impact of ES&G Factors on the Board

Today’s literature on corporate governance is overwhelmed by notions of ES&G-  environmental, social and governance matters. Environmental matters like deforestation, pollution, climate change. Social matters like war, rights of workers in foreign factories, minimum hourly wages. And governance matters going from the boardrooms of publicly traded companies all the way through to the governance of various organizations and our own elected governments. ES&G – it’s everywhere and on every agenda.

So what does ES&G actually mean for a board of directors? A North American board has been operating under the edict of Milton Friedman since 1970. In 1970 Milton Friedman said: “The business of business is business.” Therefore, the only person you really care about is the shareholder of your company. The sole purpose of a publicly traded company is to look after its shareholders.

Well, ES&G opens that Friedman definition up to a variety of new stakeholder concerns. To some extent, boards and management teams have always been conscious of the workers, the environment in which they are working, their suppliers and their customers, as well as the communities in which they work. That’s true. There has always been a broadening of corporate purpose beyond simple shareholder allegiance, but now the push is much greater. And the push is coming from the large institutions that own approximately 75% of all publicly traded companies around the world. Institutions like BlackRock with $7.1 trillion in assets, and BlackRock owns something in the order of 4,500 corporations in which they often own 2- 3%. Another huge asset manager is State Street Global Advisors with $3.1 trillion and then Vanguard at $3 trillion.

Lucien Bebchuk, the Harvard Law Professor and frequent commentor on matters of corporate governance, estimates that these three firms, that now control 20% of the S&P500 shares will control ~30% in 15 years.

The top 10 institutions will own probably 50% of all publicly traded company shares around the world. Now, the institutions are getting worried about broader things than quarterly earnings. The institutions themselves are largely there to look after pension funds. Pension fund assets have to be managed in the long term. And so there’s a nice convergence between thinking long-term and being the owner of your company. And that’s going to mean that you’re going to have to take into account as a director more consciousness of other stakeholder groups than the shareholder.

You’re going to read more and more about this. It’s going to mean more and more to your owners, and there’s going to be more and more discussions between those owners and you. State Street Global Advisors for example, now has a team of 12 people. They call them their “stewardship team”. 12 people who do nothing, but spend their lives talking to board chairs, directors and to senior managers about a broader definition of business success.

You, as directors, are going to have to shore up the management team, because if you’re widely held, the pressures on your company to perform quarter after quarter are enormous. And if you’re not performing well quarter after quarter, another group of people called “activists” will come knocking on your door. Short-termism and activism can divert a huge amount of management time and effort. It is up to you, the board, to become more responsible for the medium and long term.