In our continuing series, Corporate Governance Expert David Beatty offers insights on how to think about the jobs of Boards of Directors. 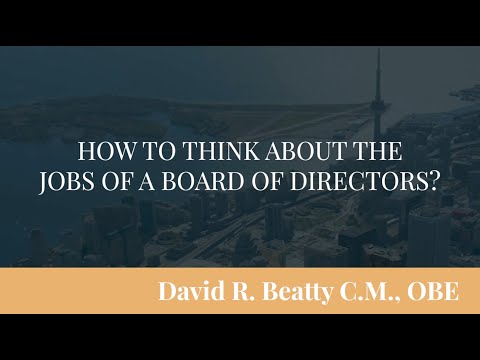 How to Think About the Jobs of Board of Directors?

David R. Beatty: Thinking about the duties of a board of director often generates a very long list of this function, that function, this idea, that idea. I tend to think of it in a group of three. Three lines of sight. Hindsight, oversight, and foresight. By hindsight, I mean looking in the rearview mirror. That’s what the audit committee does. It looks at the results, it attests them, and then it publishes them to the shareholders and the rest of the world. That’s hindsight. Oversight really addresses the fact we thought we should’ve been on Highway 400 at 89. And we’re only at 88. What went wrong? Is it an operational problem or is it a strategic change? And then foresight is where do we want to be when we grow up and who’s going to get us there?

So hindsight, oversight, and foresight, I think, are the three fundamental functions of a board. You combine hindsight with oversight in the case of it’s just an operational glitch. And I think you get the compliance or policing role of a board. You combine oversight with foresight, where do we want to go when we grow up and who’s going to get us there? And what’s happening outside? When you combine those two things, you get, I think, what is called a value add. You are helping the organization cope with the uncertainties of the present, focusing on where we’re going to be in the future.

The sad fact is when we ask boards to assess how they’ve invested their time between those three categories, we’ve found when we did this survey, about 75% of a board’s time was invested in looking at the past or oversighting the present. And only 25% was invested in looking towards the future. We then asked those same directors, 275 of them here in Canada, “How should you be investing your time?” And the answer was completely reversed. We should be investing 75% of our time in worrying about where we are with respect to the competition and change and where we want to be when we grow up, and by the way, who’s going to get us there. Not too many boards take effective time management as one of their key responsibilities.

So please, please, please. Even against those three categories of sight, try to find out how you have invested your time in the past in order that going forward you might change that allocation.

← VIDEO: How Do You Select a New Board Chair?
FINANCIAL REVIEW: Wake-Up Call For Boards as Activists Doubt Their Capability →