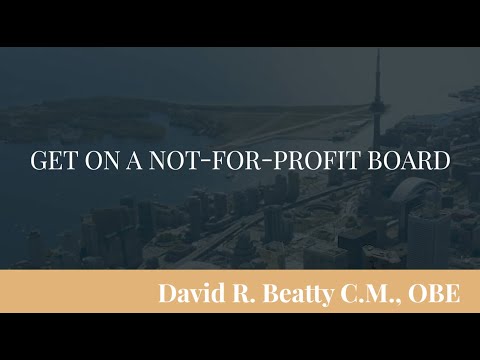 Get On A Not-For-Profit Board

Number one, thrift. There’s never enough money to go around, so you’re always thinking of ways to do something better, cheaper, with less impact on the financial statement. That’s a nontrivial point when you come to a large corporation where it might seem there’s a large amount of slack and surplus cash hanging around. Being thrifty is a great virtue.

Number two, the number of stakeholders involved in any not-for-profit are huge, absolutely huge. If you think of yourself in a public company environment as a director of a board, you’re probably spending, I don’t know, 75% of your time. 75% of your time on one stakeholder, and that’s the shareholder. Yes, you have a responsibility for other stakeholders, but that could be the employees, the community, the suppliers. But you’re going to invest 75% of your time only in the shareholder. In the not-for-profit, you have a multiplicity of stakeholders there from day one, all over the place. So learning how to cope with them in that environment should help you cope with them in the environment of a publicly traded company. And if current trends are anything to go by, the publicly traded company is going to have to deal with many more stakeholders than it does today. There’s pressure from ES&G, environmental and social government activists is permeating a lot of publicly traded companies, so the training you get in the not-for-profit might stand you in very good stead in the for-profit.

The third component is that when there’s a crisis in the not-for-profit it lands on your doorstep, there’s no avoiding it. You can think of some recently here in Canada, where sexual harassment was a problem and caused the whole executive team to leave. Nontrivial, you live it 24/7. You’ll learn how to cope with those kinds of crises. It could be the crisis of a financial bankruptcy. It could be the crisis of a departing CEO. Many kinds of things can happen to you in a smaller not-for-profit that could presage some kind of panic stations exercise you’re going to have in a for-profit.