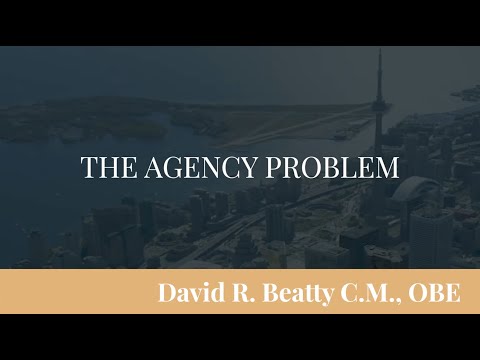 Why do institutions that promote good corporate governance so strongly favour shareholder influence when it comes, for example, to the outcomes of a company’s director elections?

Well, it all goes back to Michael Jensen, a very famous Harvard professor. He created something that he called the agency problem.

What is the agency problem?

Here’s how Jensen framed this problem: if you separate a company’s managers from its owner—that is, the person who owns the company but doesn’t show up for work—those managers will try and skew things topretty much fit their own interests.

Let’s imagine I’m the CEO of a company that you own. While I’m getting paid to run your company, I decide I need seats at a basketball game. I decide I should take our customers out to a Michelin two-star restaurant for dinner. I decide I need a second corporate jet.

It’s all for the good of the company, I tell you.

Here’s the thing: I’m making these decisions as someone who has less than full exposure in terms of equity, but you, the company owner, are fully exposed.

For you, my behavior is creating what are called agency costs. The basic presumption of the agency problem is that managers will tilt corporate interests somewhat in their favour if not lie, cheat and steal.

I know that’s an exaggeration. But if you think about it, the more you leave a person alone and unaccountable, the more tempting it is for them to lie, cheat and steal.

How owners combat the agency problem: the shareholder-value system

Company owners say that they need to have some influence over the practices of their companies’ management teams. They do that through the board of directors.

This approach is known as the shareholder-value system. Through it, independent directors oversee the work of management, paying careful attention to management emoluments, benefits, perks and requisites. And as long as the owner sat on the board of directors there might ell have been some consistent discipline to “manage” the agency costs.

But when the owners are personally absent and where ownership is hugely diverse, as it is in 95% of all publicly traded companies today, then agency costs can increase. In today’s ownership world where ~30% of all S&P500 company shares are owned by institutional investors like pension funds, BlackRock, State Street and Vanguard ownership is once again separated from control.

Today’s institutional shareholders believe that they can do a better job of overseeing the company and controlling it’s Agency Costs than the “independent” board of directors might be doing. So, institutions are demanding more approval rights like “Say on Pay”.

Arguments about greater shareholder control might sound persuasive. But recently, another theory has arisen, in part owing to the growth of activism. This new theory is called principal-costs theory.

The principal-costs theory points out that there are costs to being a publicly traded company whose shareholders want to be in charge of everything. It’s rare for a company’s shareholders to all want the same thing, and when they go to war with each other, the costs for the company quickly escalate.

Just to give a couple of examples, there are the costs that relate to defending against short termism, not to mention the costs arising from fighting activism, which has permeated all the markets—big, medium, small, nano caps—in most countries around the world.

And these are real costs. They not only cost out-of-pocket money for lawyers and defence teams and consultants to offer advice beforehand. They cost 20% to 30%—maybe even 50%—of the top management team’s time, which is perhaps the scarcest resource in any corporation.

According to the principal-costs theory, stakeholders in a firm need to consider not only agency costs but also principal costs, and then strike some sort of balance.

If you can grasp the importance of balancing agency costs and principal costs, you might come round to a very different point of view on dual-class shares.

And as I’ve said before, I think dual-class shares are a very productive device when it comes to thinking about how to bring a company public in a way that minimizes costs to shareholders and protects the corporation’s future.