Techniques And Tools To Survive The Digital Tsunami 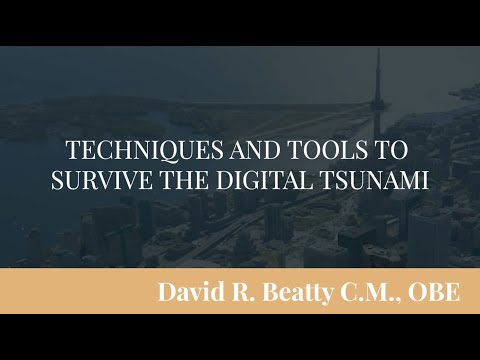 Techniques And Tools To Survive The Digital Tsunami

The COVID crisis has accelerated the pace of digital transformation in almost every business in the world. Now, McKinsey is doing a ton of work trying to catch up with the impact of the crisis on the operations of most companies, and what they’ve discovered is that digitization is increasing at an incredible pace along the supply chain, along the distribution of customer channels, and digitization of employee contact and interaction. They say that something like 85%, that’s a sample of 2000 companies, 85% have accelerated digitization, and in the use of automation and artificial intelligence, 70%, 70% of all publicly traded companies in the world have accelerated automation and artificial intelligence. Now, you can catch up to this just by going to the McKinsey website as they have a constant stream of COVID-19 impacts, but the one as a director you must take away is that digitization is increasing and increasing dramatically. It was always there, but this has probably doubled the impact and the speed with which it’s changing every single business in the world. It’s quite an extraordinary transformation.

How do you, as a director, cope with that? Well, there are a number of different strategies. We’ve talked about some of them in earlier videos, but number one is think about the skills matrix on your board. The poster boy here is Walmart, because Walmart, as opposed to considering itself a grocery chain and therefore its competitors are in the grocery business, said, “No, actually, our long term strategic competitor is Amazon.” What do our average 62 year old directors know about digitization, social media, Amazon? The answer was nothing. So they have put three 40 year olds on the board of Walmart, three 40 year olds. And secondly, they created an automation and technology committee of the board that included those three, but some of the others. So number one, as a Board of Directors, think about your skills matrix. Do we have anybody on this board that really can help us? And the management team deal with the pace of digitization and digital disruption? If the answer is no, think young.

Two, maybe you should set up a separate board committee to give some focus to this, because it’s going to transform your business, whether you know it or not, and best to know it. Number three, you might well tell the CEO, “We would like you to invest X percent of your time in understanding new technologies.” In the case of Marriott Hotels, they went to the man who ran Asia Pacific, and China is a global leader in digitization. Think of ANT financial, it’s going to be the largest IPO in the history of the world. Think of Alibaba, it’s currently the largest IPO in the history of the world, both out of China. They said to Craig Smith, who was President of Asia Pacific, “Craig, we as a Board of Directors through your CEO want you to invest 25% of your time, a quarter of your life, in understanding these technological changes in China and bringing them to us in America.”

So Craig did a joint venture with Alibaba and he did a joint venture with Ant Financial, and the amount of learning being brought into the hotel chain Marriott from that endeavor has been colossal and transformative. So that’s the third component, ask your CEO. A fourth idea is to get out there and visit. Tom O’Neill, who was the Chairman of the Board of the Bank of Nova Scotia, took the entire bank board and C-suite to Silicon Valley for five days, and the people they met and the discussions they had and the companies they visited completely changed the mindsets of pretty much everybody on that tour. And so now the Bank of Nova Scotia thinks about digitization and the disruption of the financial services industry in a very much more intimate and direct way. You have to find some way to get your board to accelerate its understanding and its deepening of its understanding of what’s going on in transformative events around them so that they can respond. If you don’t do that, you may not be on that Board of Directors for much longer because the company will no longer be there.

Get On A Not-For-Profit Board David Beatty: Not-for-profit boards; go on one to save our society and make the world a better place, please. But in doing so, know that you are probably improving your capability as a director in a for-profit corporation as a direct result. END_OF_DOCUMENT_TOKEN_TO_BE_REPLACED

In our continuing series, Corporate Governance Expert David Beatty offers insights into how ES&G factors may affect your corporate board of directors. END_OF_DOCUMENT_TOKEN_TO_BE_REPLACED

Join David R. Beatty, C.M., O.B.E., M.A, F.ICD, CFA, and Matt Fullbrook, the Director and Manager of the David & Sharon Johnston Centre for Corporate Governance Innovation respectively, to explore the common misconceptions about the governance of dual-class share structures.  What are unique benefits and risks of dual-class structures and what sets them apart when… END_OF_DOCUMENT_TOKEN_TO_BE_REPLACED

David R. Beatty recently appeared on the popular podcast, “Board Governance with Evan Epstein”.  EPISODE SUMMARY In this episode, I talk with David Beatty, one of the most experienced Canadian directors and educators about his career and thoughts on governance, including his service on 40 different boards of directors, 9 of them as Chair of… END_OF_DOCUMENT_TOKEN_TO_BE_REPLACED